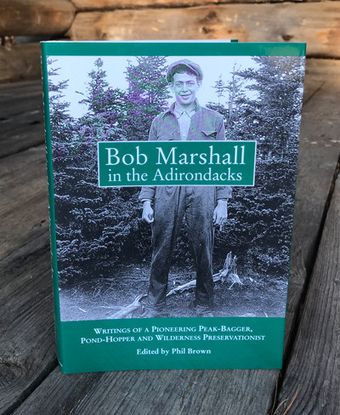 Bob Marshall in the Adirondacks

Bob Marshall in the Adirondacks contains nearly forty writings about the Adirondacks by one of America's greatest champions of wilderness. These articles are part of Adirondack and conservation history. Hardcover, 308 pages, 6 1/4" x 9 1/4", more than 60 photographs & a dozen maps. Edited by Phil Brown

Bob Marshall embodied the spirit of wilderness, and fought for wilderness protection throughout the United States. His passion for wilderness was nurtured in the Adirondack Mountains. They include numerous accounts of his pioneering hikes in the High Peaks and of his explorations in the vast wild region south of Cranberry Lake, spirited defenses of the forever wild Forest Preserve, and a charming sketch of guide Herb Clark. The articles reveal Marshall’s deep personal connection to the Adirondacks, and the inspiration for his commitment to wilderness preservation. Also included are three articles by Bob’s brother George Marshall; pieces by historian Phil G. Terrie, conservationist Paul Schaefer and writer Phil Brown; a humorous ode to peak-bagging by writer Bill McKibben; and, the Adirondack Council’s proposed Bob Marshall Great Wilderness.

“There is just one hope of repulsing the tyrannical ambition…to conquer every niche on the whole earth. That hope is the organization of spirited people who will fight for the freedom of the wilderness.” Bob Marshall